As I have shared, I am a film buff…

The other day I watched the movie,
“End of Watch.” I remember when it was first released in theaters, last summer. I didn’t go to the theaters to see it, as I  tend to be weary about films about police officers. The Hollywood Industrial Complex usually has an agenda with these type of movies. The films usually try to portray  police officers in a redeeming light.  This is not to say all police officers are evil, but when you are a person of color, the police are usually more of a threat than heroes.

But… the other evening I was bored, so I decided to give the film a try (it’s streaming on Netflix).  The film is basically an updated version of the 1988 movie, “Colors.”  The film has been tweaked with contemporary characters.  Instead of an older white male  cop trying to impart wisdom to a younger white male cop, both of the lead characters in “End of Watch,” are young men. One is a young Latino male, and the other is a young white male.

The second tweak, is that instead of  animal-like black gangbangers,  the violent gangbangers this time around are Latino/a.  The story takes place in Los Angeles, so right off the back you shouldn’t have love for these police officers. We all know (or should know) about the racist history/racial profiling that goes on with the LAPD.

The movie is filmed in the documentary style that is popular these days with directors (the lead white character has film project for his class). While this tends to be an overused way to tell a story, it does allow for viewers to get more intimate with key characters. As the two young officers ride throughout the city, it’s hard not to connect with them on some level (even when you try to be cynical, like I did).

The young officers battle a black “hoodlum”, accidentally stumble upon a human trafficking racket, and anger a hard-core Latino/a gang. The last incident will turn out to be the undoing of the two police officers. The young two officers do all this with humor, fraternity male bonding, and a little loving from their ladies.

Of course, I always watch  films with a critical eye of black women characters. The black female representations are very brief in the movie. The first time we see a black female character, she is a crackhead. She is so doped up on drugs, she thinks she has lost her children. It turns out, she just left her baby and toddler in a closet. The baby is duct tapped to her car seat.

The next image of a black female character, is fleeting.  Her house is on fire. The two young police officers come to her rescue,  by saving her children, she left behind.  These black mothers are so  irresponsible!

As Latino/a gang members are the focus in this film, the Latina character is given a more prominent role.  She is shown as being just as violent (if not more cold-blooded), than her male counterparts. Heck, I almost expected her to say Keshia’s  famous lines from New Jack City, after she shoots a police officer in the back. Instead she says, “Rest in piss… bitch.”

The film also has some disturbing scenes of  violence. As mentioned, there is a scene of human trafficking. The victims are shown almost naked and locked in a cage. Also, dead bodies and dismembered limbs are shown, graphically.  The last half of the film almost plays out like a video game.  All you see are bullets flying and bodies dropping. The ending has the required twist, but the  person that survives is kinda not surprising (hint: who has a bigger image on the poster).

It’s hard to recommend this film, because damn they’re cops! The film has an agenda. But I guess if you can put politics aside, it’s an interesting action flick. 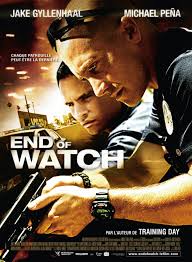