I’ve been processing the death of Renisha McBride.  The thought of having to write about the murder of another young black person, was daunting. However, I know that my heartache doesn’t compare to the pain of the McBride family.  Also, I think it’s important for those of us who blog, twitter, tumblr, etc., that we keep these issues in the forefront. Mainstream media often tries to bury these stories. It’s usually due to the push back of parents/family, why we even learn about these killings in the first place (as in the case of Trayvon Martin).

It’s alarming that black women are being increasingly killed by white racists/police. Our womanhood doesn’t protect us (despite the rhetoric of white feminists that women suffer the same struggles).  Black women have been so degraded/stereotyped in mainstream media (e.g. angry, ready to fight, ,etc.) that many non black folks find us as threatening as black men. There have been times I have been out late at night, and grown white men crossed the street when they saw me. Shouldn’t  I be the one in trembling in fear?

A couple of nights ago, I attended a vigil for a young black man murdered in my city. His father had been protesting for three years, about the unlawful death of his son by police. A couple a weeks ago, the father passed away, literally from a broken heart. The extra stress of dealing with murder of his son compounded his heart problems.   I can only imagine the level of frustration/sadness/confusion of parents of  these murdered children. You don’t think your child will be shot in your gated community. You don’t think someone is going to shoot your child when they have a car accident and need help.

It’s angering that black parents are suffering like this. All parents/folks should be outraged that children are being murdered so senselessly.  I think things are going to get worse before they get better.

Other articles about the case:

In Cold Blood: The Murder of Renisha McBride http://thefeministwire.com/2013/11/in-cold-blood-the-murder-of-renisha-mcbride/

Black People Do Not Have The Luxury of Being Strangers http://www.dailykos.com/story/2013/11/12/1255109/-Black-People-Do-Not-Have-the-Luxury-of-Being-Strangers-Renisha-McBride-was-Killed-by-the-White-Gaze?showAll=yes# 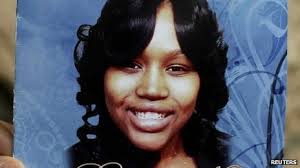