While I was banished to the land of sickness,  I was still able to see Kendrick Lamar’s interesting Grammy Performance. The 28-year-old rapper made a heartfelt statement about black men and the Prison Industrial Complex (PIC).

It was a bold stand at an event that has become too pop/boring/white washed.  I know I personally haven’t paid attention to the Grammy Awards show in years.

I read an article critiquing the lack of space given to black women prisoners in his performance. I’m willing to give Lamar a slight pass for this. As a young man, he’s probably had more experience with his male friends/relatives/young folks he mentors having contact with police/the prison system.

With that said, despite black women being incarcerated at an alarming rate as much/if not more so than black men, the focus still tends to be on black men in prison.

Years ago, I took a class on women and the PIC. Our class read “Resistance Behind Bars: The Struggles of Incarcerated Women,” by Victoria Law. Law, an anarchist writer and prison abolitionist, detailed her experiences working with women prisoners. A zinester/DIY artist, she helped the women create a zine showcasing their words/art on prison life. The majority of women she came into contact with had children.This brings me to why it’s urgent we also focus on black women in prison. 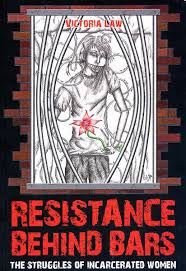 The truth is, women tend to be the primary caretakers of their families. It doesn’t matter if there is a male partner in the home or not. This is particularly true in black communities, were we rely heavily on our extended female relatives.

A disturbing trend I noticed in our class readings, is that whole black communities are being wiped out due to the PIC. It’s leaving significant amounts of black children without parents or guardians. Because not only are the mothers being overly incarcerated for minor/non violent offenses, but so are grandmothers/aunties/cousins etc. I remember reading about a grandmother and her daughter and the daughter’s daughter all locked up   in the same prison (drug addictions). The young daughter’s children were in foster care. There was no one to take care of them.

These mothers are losing custody of their children left and right. Obviously, they are in prison. They can’t just walk down to the local courthouse to attend court dates etc .

The PIC is destroying black motherhood/families. This issue really needs to be addressed in folks anti-PIC activism. Good job to Lamar for highlighting the problem of black men in prison, but we need to expand the conversation.