March is Women’s History Month. I’ve been trying to think how I could honor this month. Since this blog focuses on black feminism as a tool to resist oppression, I thought it would be proper to show love to a woman who helped revolutionize black feminism. That woman is the author bell hooks:

“bell hooks, is an American social activist, feminist and author. She was born on September 25, 1952. bell hooks is the nom de plume for Gloria Jean Watkins. bell hooks examines the multiple networks that connect gender, race, and class. She examines systematic oppression with the goal of a liberatory politics. She also writes on the topics of mass media, art, and history. bell hooks is a prolific writer, having composed a plethora of articles for mainstream and scholarly publications.”  http://www.egs.edu/library/bell-hooks/biography/

I first learned about bell hooks in college (which is way too late if ya ask me). I took a course all about bell hooks. We read her books and discussed them in class. The thing I love about bell hooks is that she keeps it real. As a poster responded to an interview with hooks,“she gives it to you straight, no chaser.” This can be off-putting to folks, especially folks who have bought into what bell hooks calls ‘Imperialist White Supremacist Capitalist Patriarchy.‘ She is going to hurt your feelings. Rip out your heart, really. But it’s only because she wants you to think deeper about the world around you. Too many folks believe racism, sexism, classism, homophobia, etc., that it’s “just the way it is.” These oppressions have been normalized in our society. However, we must resist this conditioning. Someone shouldn’t be viewed as more valuable just because of the whiteness/lightness of their skin, because they are male, rich, etc. We all deserve to live our lives with respect and dignity.  That is all bell hooks is saying.

So much love to her this month and every month. I also like to give  honor to other pioneer black women feminists: Sojourner Truth,Fannie Lou Hamer, Alice Walker, Michele Wallace, Audre Lorde, and Patricia Hill Collins.  Of course, this list  could go on forever!!

A lot of anti-black racism/blackness is steeped in anti-black womanhood.  Recently, singer/producer Pharrell Williams annoyed black women/folks with this album cover for his new song: 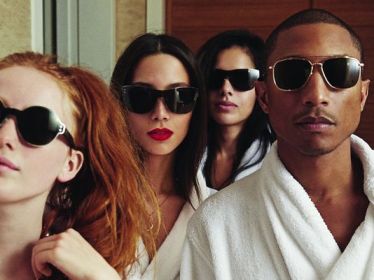 “By no means am I saying that objectifying women sits better with me when it’s Black women as opposed to others. The problem I have is with the perception that white women are an accessory that’s synonymous with luxury and success; that there’s a golden stair lined with pretty women that symbolizes a man’s climb toward the Promised Land where Black women are relegated to the bottom step. Our young people are being told that “just Black” isn’t enough and that idea being associated with hip-hop is bothersome, to say the least.”

Williams has tried to defend himself in the most ridiculous way, but his response is not surprising. The majority of black celebs/rappers today are obsessed with white acceptance. They could give a f*ck about the impact of their actions on black women/the community.

But it goes deeper than just album covers…

A few months ago, a friend gave me a TV. The TV is old as hell, and after just a few days of watching it, only one channel worked

I am forced to watch new Jerry Springer type talk shows. It has reminded me why I avoided TV for the past year.

It’s the same old same on these shows, but what has grown worse is the representations of black women. If black women aren’t cussing each other out, they are physically fighting. If they aren’t in a healthy relationship, they are sleeping with friend’s man. The “baby mama” episodes are endless, as well as paternity tests.

It doesn’t matter if it’s her own family members, in relationships with black men or non black men, or even same-sex relationships, black women are portrayed as bothersome folks to deal with.

These images are being put out there to justify the real life oppression of black women.

It’s a strange time for black women. On the one hand,  folks like Kerry Washington (Scandal), Lupita Nyong’o (12 Years a Slave), are being celebrated. But on other, the majority of black women are being erased, white washed, or horribly stereotyped.

This anti-black woman hostility is probably why I tend to get piss poor treatment by black folks/non-black folks alike. The majority of folks have nil respect for black women.  Sadly,  I think it’s going to get worse before it gets better.

I hope you have enjoyed my different topics in celebration of Black History Month. Have a good weekend!